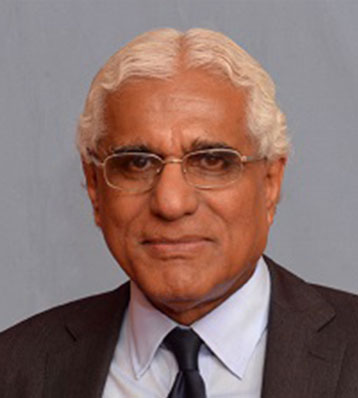 Dr. Indrajit Coomaraswamy was Governor of the Central Bank of Sri Lanka from July 4th 2016 to December 19th Dr. Coomaraswamy has over 40 years of experience in policy making and providing economic advisory services, on both macroeconomic and structural issues at national and intergovernmental levels.

He was employed by the Commonwealth Secretariat from 1989-2008. During that time, he held positionssuchasDirector, Economic Affairs Division and Deputy- Director, Secretary - General’s Office. HehasalsoservedastheInterimDirector, Social Transformation ProgrammeDivision. Dr Coomaraswamy has also served as an Independent Non-Executive Director of John KeellsHoldings PLCfrom2011toJuly2016;Tokyo Cement Company (Lanka) PLCfrom2011toJuly2016 and May
2020 to date; and Sarvodaya Development Finance Limited.He is also currently Chairman of Linear Wealth Management and an Independent Non-Executive Director of Dialog Axiata plc as well as a Distinguished Fellow at the Pathfinder Foundation.

Dr Coomaraswamy received awards as the “Sri Lankan of the Year 2016 “(LMD) and “Central Bank Governor of the Year for South Asia” 2017 (Euromoney Institutional Investor Group Plc). He also received the Sri Lankan national honor of “Deshamanya” in August, 2019.